The price of pepper this year has grown continuously with almost no stop.

After the trading session on April 28, pepper prices fell slightly on the Kochi-India exchange, but over the next 2 days, April 29 and 30, pepper futures prices rebounded, setting a new record. . 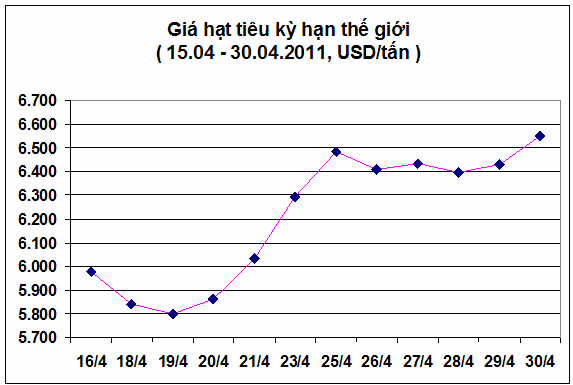 In the futures market, pepper price this year has grown continuously with almost no stopping point. This is within the predictions of analysts, monitoring the market because the world pepper supply is too short, but the growth also shows that this year the world pepper market has problems of concern.

The first concern is that consumer demand is increasing, but supply has not kept up. According to statistics, this year world consumption increased by about 5% compared to 320,000 tons in 2010. Meanwhile, the total supply is only about 297,000 tons, which means the world shortfall is about 33,000 – 35,000 tons.

At the beginning of 2011, the Vietnam Pepper Association (VPA) cautiously predicted that this year the world will have a shortage of pepper and our country will benefit when the export price of black pepper at the end of the season is likely to increase. will reach 6,000 USD/ton.

It can be affirmed that the movements of the domestic and international markets have exceeded all expectations. On April 13, the domestic price of black pepper in a bucket rose to the mark of VND 120,000/kg, in the context that a day earlier, the world’s medium-term pepper price had surpassed the USD 6,000/ton mark.

The domestic price of bucket pepper dropped slightly to 108,000 VND/kg but the market was barely active. All promises are waiting for the holiday to celebrate National Reunification Day 30/4 and Labor Day 1/5 which will be extended through 2 days of the beginning of next week.