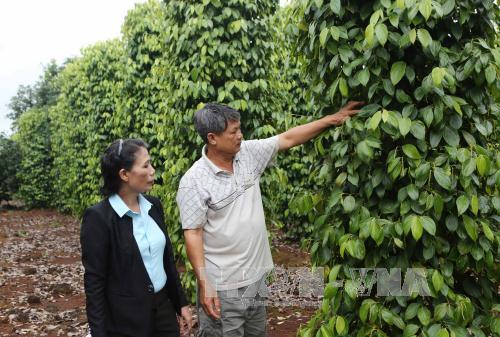 In 2017 alone, ethnic people in the provinces of Dak Lak, Dak Nong, Gia Lai and Lam Dong planted more than 16,207 hectares; in which, Dak Lak is the locality with the largest newly planted pepper area with over 5,500 ha.

According to many farmers, although the price of pepper is low, the profit from pepper cultivation is still many times higher than that of some other long-term industrial crops such as coffee, cashew, etc., so the people still convert a some areas of coffee and other inefficient crops were converted to pepper.

Mr. Ly Van Suu’s family, in the remote commune of Ea H’leo, Ea H’leo district (Dak Lak), boldly transferred more than 2 hectares of coffee at the end of the business cycle, with poor productivity to grow pepper. Although this crop has just been divination (after 3 years), Mr. Ly Van Sau said that with the current price of pepper, plus the effort and investment capital for pepper is many times lower than that of coffee. He hopes that the development of pepper will bring higher economic efficiency than coffee.

And Mr. Tan Hoang, also in the remote commune of Ea Toh, Krong Nang district (Dak Lak), cut down more than 1 hectare of coffee and switched to growing pepper, saying that 1 ha of coffee, each crop year, yields less than 2 tons of coffee. Coffee beans, with the current price (36,000 to 37,000 VND/kg), only collect more than 72 to 74 million VND, after deducting expenses, the profit is not much. Meanwhile, 1 ha of pepper, after 4 years of being put into business, with an average yield of 3 tons/ha, at the current price, after deducting expenses, there is still a profit of nearly 100 million VND…

In fact, at present, many localities in the Central Highlands, households have converted a series of dry crops to pepper cultivation, but local authorities still cannot control it. However, the development “hot” Pepper trees also lead to many consequences for localities in the Central Highlands, especially breaking the planning on crop structure, arranging pepper cultivation in many unsuitable lands, using many varieties of pepper of unknown origin. … so every year the Central Highlands provinces have thousands of hectares of pepper affected by pests and diseases, diseases die quickly, die slowly, causing great damage to farmers.

Currently, the Central Highlands provinces have a total pepper area of ​​more than 85,249 hectares; in which, Dak Lak is the locality with the largest pepper area with over 42,563 ha, followed by Dak Nong province.