Continue to carry out the task of surveying the key pepper growing provinces in 2018 in Binh Phuoc and the Central Highlands provinces, in order to evaluate the productivity, area, output as well as the situation of pests and diseases in the provinces to assess the results. pepper production results in 2018, the Vietnam Pepper Association (VPA) organized a business delegation to conduct field surveys in some key pepper growing areas of Binh Phuoc – Dak Nong – Dak Lak – Gia Lai province, from January 16 to 19, 2018.

95% of Vietnam’s pepper area is starting to harvest in 2018, the Vinh Linh pepper growing area will harvest about half a month earlier than Se and Malaysian pepper varieties. Autumn will be in mid-February. 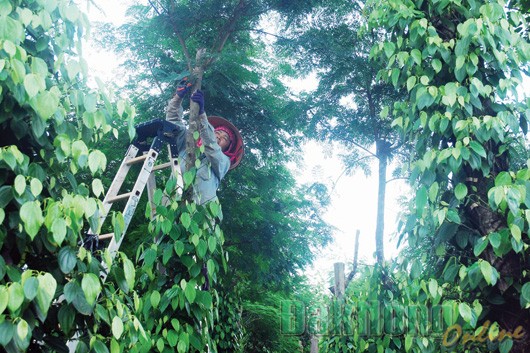 Information from the locality said that this year, pests and diseases do not arise, and the price of pepper is low, so farmers in the area almost do not spray more drugs to prevent pests and diseases and some fertilizers to supplement nutrition for fruit farming. In December as in previous years, the quality of pepper so this year may be better, the problem of pesticide residues on exported pepper may be improved.

In 2017, the weather was unfavorable to pepper production, so productivity in many places decreased significantly, especially in old pepper gardens, degraded and hardened pepper growing land such as Loc Ninh, Bu Dop, Binh Phuoc… no For the harvest, some districts grow perennial pepper in Dak Lak, Gia Lai, etc., the yield is reduced by 70-80%. However, in 4-5 year old pepper gardens, especially in new lands, the degree of impact is not great, especially in gardens that are cared for, well drained, fertilized, and farmed. People often visit the garden. The good lands, newly planted from 2013 to 2014 such as Dak Song, Dak R’Lap … (Dak Nong) or Chu Pong, Mang Yang (Gia Lai)… the yield is still equivalent, even higher than the previous year.

In general, although the 2018 pepper production in the whole country may decrease by 30%, Vietnam’s pepper output may not decrease because the new planting area exploded in the years 2012-2013, this year, the harvest started. With the national average yield of about 20 quintals/ha, next year’s output can completely make up for the expected loss due to unfavorable weather this year. Output is estimated at 180,000 – 200,000 tons.

The domestic pepper trading market is in a bad state, especially in the main pepper producing regions. Although the harvest has not yet entered the official harvest, the price has continuously plummeted, so the purchasing agents have not made a strong move to prepare for the harvest when it comes to the harvest like in previous years. The main reason is that banks are tightening lending because they are afraid of high risks due to low pepper prices and because many agents still consider not daring to buy because they are afraid that the price of pepper will fall further, causing losses. There is also the reason that many dealers are turning to using investment capital to buy coffee because it is predicted that daily trade in the near future will be better than pepper. This situation is causing pepper farmers to be very worried that the 2018 harvest will not be able to recover their capital after a year of spending a lot of money on pepper gardens.

Vietnamese pepper according to Nedspice summary in 2017

The overall export situation in 2017 was a very volatile year, however, the export volume reached the highest level ever, although the domestic price of pepper fluctuated by nearly 50% compared to the end of 2016. due to the excessive increase in global supply including Vietnam.

According to the report of the General Department of Vietnam Customs, Vietnam’s pepper export volume in 2017 reached 215,081 tons, earning more than 1.1 billion USD, up 20% in volume but down 22% in value over the same period. term 2016.

The trend of low prices is likely to continue in 2018 due to the increasing production of pepper globally.