Oil prices were little changed in a volatile session, as investors weighed the impact high energy costs could have on the global economic recovery.

Brent crude rose for five straight weeks, while WTI gained seven weeks in a row. Both oils are up more than 15% since the beginning of September.

Electricity prices have surged to record highs in recent weeks, driven by shortages in Asia and Europe, with the energy crisis in China expected to last until the end of the year.

Even with increased demand, OPEC+ is maintaining its plan to restore output gradually rather than quickly.

Gold prices rose as fears of rising inflation dampened demand for risk assets and boosted demand for the safe-haven metal, although a stronger dollar capped gains.

The global energy crisis has threatened the economic outlook and heightened inflation fears, prompting some investors to turn to safer assets.

Gold has traditionally been seen as a hedge against inflation. However, reducing central bank stimulus and rising interest rates tend to push up government bond yields, leading to an increase in the cost of holding gold.

According to Commerzbank analyst Briesemann, if the talk of inflation becomes more and more intense, gold could hit $1,900 an ounce by the end of the year as interest rates remain relatively low even as the Fed begins to cut. arouse.

The price of copper fell

Copper prices fell on rising energy costs stoking fears that the global economic recovery could derail, although signs that supplies of the metal are tight have limited the downside.

Copper prices rose to a record high of $10,747.5 per tonne in May before falling as the world’s economic recovery began to slow down.

However, shipping bottlenecks have pushed copper inventories to historic lows in regions where the metal is used, according to analysts at JPMorgan.

Iron ore prices fell, with iron ore in Singapore dropping more than 7% after four days of gains and the Dalian contract erasing early gains, as investors focused back on controlling steel production in China. Country.

The November iron ore contract on the Singapore Exchange fell 7.4 percent to $125.4 a tonne.

Steel output in China, the world’s largest producer of building materials, will have to drop by 10 percent between September and December to match its net carbon target.

China’s crude steel output in the first eight months of the year increased by 5.3% year-on-year, despite the strengthening of production controls starting in July.

Japanese rubber prices rose, reversing the initial decline, as a weaker JPY against the USD spurred buying while worries about low inventories in China, the top importer.

A dealer in Tokyo said rubber inventories at the Shanghai futures exchange are below the five-year average at the moment, which has supported recent price increases in Japan and China.

Arabica coffee increased by more than 4%

Dealers say there are rumors that global freight problems have caused coffee stocks to dwindle as demand for one of the world’s favorite drinks remains strong.

Stocks of arabica coffee on the ICE exchange have decreased by 11.5% since the beginning of September.

Dealers say sugar remains well supported, given the view that end-consumers will soon need to replenish reserves and Indian sales will only increase to around 21 or even 21.5 US cents.

The French Ministry of Agriculture raised its sugar beet production estimate, while the USDA also raised its forecast for US production.

Soybean prices in Chicago fell to their lowest since December 2020 after a US government report showed soybean and corn production was larger than traders previously expected.

USDA has estimated soybean production at 4.448 billion bushels and yield at 51.5 bushels per acre.

Prices of some key items on the morning of October 13: 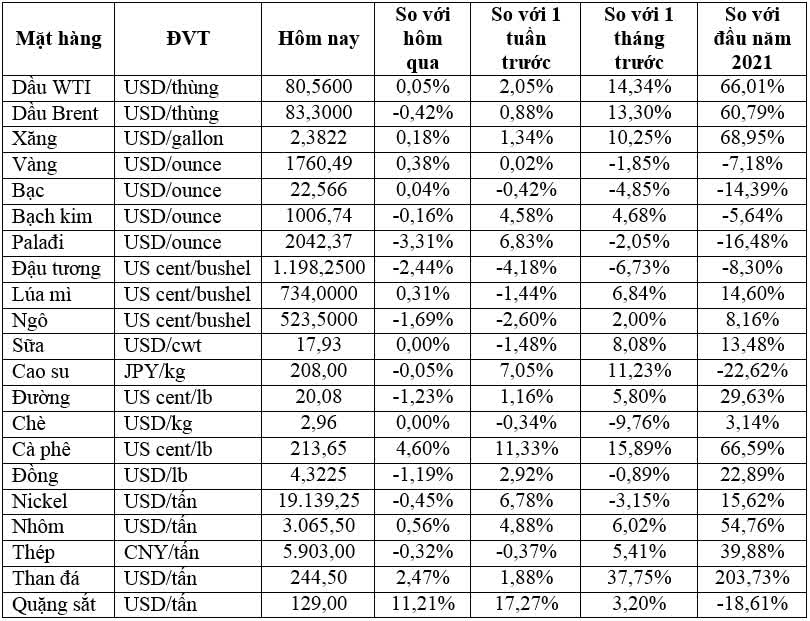